Did you know… that "Happy Hour" began as an event in the military? It is believed that the term comes from events organized for the US Navy in 1913. Here's the whole story.

Did you know… that “Happy Hour” began as an event in the military??

Happy Hours, as we know them today, got started during the early days of the Mexican-American war. It is believed that the term comes from events organized for the United States Navy in 1913.

The origin of the phrase “Happy Hour” when referring to a scheduled time for entertainment and imbibing is not perfectly clear, sort of like the effects of staying at a Happy Hour for too long. The names “Happy Hour Club,” “Happy Hour Social Club,” and similar variants, had been in use as the names of social clubs, primarily by women’s social clubs, since at least the early 1880s.

Happy Hours in the Navy 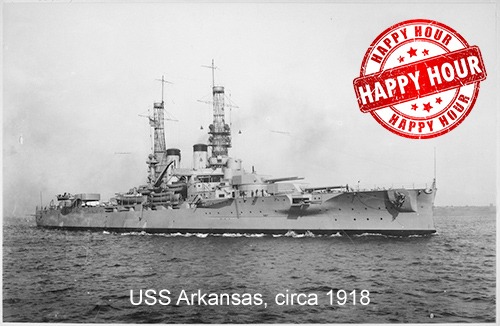 In early 1913, during the occupation of Veracruz Harbor in the Mexican-American war, a group of women from their social club called the “Happy Hour Social” organized semi-weekly “smokers” on board USS Arkansas. By June 1913, the crew of the Arkansas had started referring to these regularly scheduled smokers as “Happy Hours.” The Happy Hours included a variety of entertainment, including boxing and wrestling matches, music, dancing, and movies. By the end of World War I, the practice of holding Happy Hours had spread throughout the entire Navy.

By the end of WWII, happy hours were a “thing.” The relaxing practice had spread throughout US naval fleets. But on April 25, 1959, a Saturday Evening Post article popularized “Happy Hour” for everybody outside the Navy. In fact, the Random House Dictionary of American Slang dates “Happy Hour” as a term for afternoon drinks in a bar, to that very Saturday Evening Post article on military life from 1959.

We’re thankful that, after months of restaurants being closed due to the pandemic, we can finally go enjoy Happy Hours in Ventura County once again.

Did You Know… ? Hidden Valley Ranch