The Totally Local VC founder provides insight into her obsession with our county during a recent interview.

My meeting with the founder of Totally Local VC 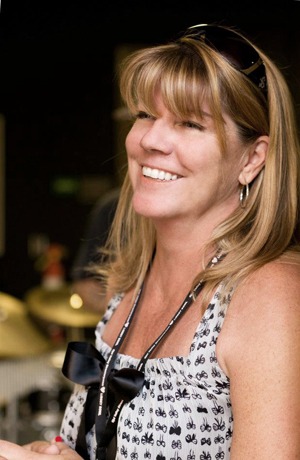 There are few people more passionate about Ventura County than Kat Merrick. So, it came as no surprise when she suggested we meet at one of the local, independent cafes in Downtown Ventura. She arrives for our meeting tan, athletic, wearing casual beach attire and outwardly resembling the 18-year-old from Florida who relocated to Ventura in the 1970s to chase a wave and a dream. As enthusiastic as she was about surfing then, she has become so about Ventura County, so much so that it has become her life’s work, or more like her life’s mission.

As we sit down to drink our tea, Merrick noted that the Shop Local crusade has its roots in the Boston Tea Party. “No Taxation without Representation” didn’t strike me as the battle cry of a locavore, but I am intrigued. She explains: “Colonists revolted against the East Indian Trading Company’s (think big box stores) tax-free tea monopoly that threatened to put the local tea importers and tea houses (mom and pop shops) out of business. The Support Local colonists opposed the big-business choke hold by pouring 90,000 pounds of their tea into Boston Harbor and there the seeds of the American Revolution were sewn.”

Living local was an early necessity 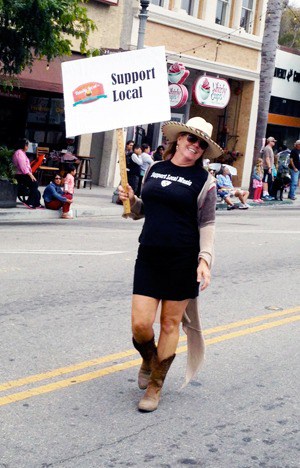 For someone like Merrick, who has been committed to the living-local cause for most of her life, having mentors in our country’s forefathers isn’t entirely unexpected. Growing up on a small island in Key West, Merrick says: “Living local wasn’t just an option, it’s all there was. All businesses were small and everyone knew each other. Your neighbor was the butcher and another, the insurance agent. These were the same people you saw at the Little League games and high school sporting events. There was a real sense of community and interdependence that allowed the residents to flourish.”

Connected to the land

Early on, Kat spent her summers on a farm. This exposure forever connected her to the land. Once in California, Merrick befriended a local surfer, Phil McGrath, whose family farming history in Ventura County resonated with her in a way that would eventually yield a calling, but not until she had become convinced that a commitment to living local was the only way America could survive and thrive.

The entrepreneur versus big business

After earning a business degree, Merrick spent most of her career in the apparel industry as a vice president of outsourcing and design. It was during this time, with the advent of NAFTA and GATT, that Merrick witnessed the destruction of many small towns in America whose principal industry was garment manufacturing. Less costly goods were being produced offshore and imported into the United States. “It was heartbreaking. Previously, I sourced t-shirts and other garments made in southern cotton towns. But, eventually, similar garments from foreign manufacturers started flooding the US market for pennies on the dollar. American businesses just couldn’t compete. Jobs were lost and a way of life disappeared.”

Merrick left the corporate apparel industry in the mid-90s and founded Ventura-based Kat House Productions, designing and selling casual surf-inspired fashions under the Surf Chick label. Ten years later, a trademark dispute with a fashion powerhouse left the company destitute. Her commitment to small businesses and local living was never more personal than when the opposing lawyer remarked that he didn’t expect to win on merit, but knew the litigation would be enough to drive a small business like Kat House to the brink.

Merrick begrudgingly returned to the corporate apparel industry, which required a long commute to Los Angeles. She quickly tired of the politics of big business and missed the time away from her Ventura County home. However, it was her assigned role as the “Grim Reaper” in laying off hundreds of people as the economy spiraled downward that prompted Merrick to leave the corporate world for good and spend some time soul searching.

Connecting to the local community

As she reconnected to her community through volunteering, she noticed how eager people were to be part of their local area. She witnessed the expansion of farmers’ markets and the advent of the farm-to-table movement as people yearned to relate to their food source. “Shop Local” initiatives had begun in earnest across the country so Merrick travelled to interview and observe before deciding what to do at home. She discovered that these efforts were mostly advertising programs and very little else.

The birth of Totally Local VC

So, in 2009, at the urging of several friends and mentors, (including farmers Phil McGrath and Mary McGrath, FOOD Share’s Bonnie Weigel and then Ventura City Manager Rick Cole) Totally Local VC was born with three essential components – Educate, Advocate and Celebrate. “Our first projects were the website, Facebook page and the Dinner At The… dinner series. Through these vehicles we provide education, advocacy and celebration of everything that is Ventura County,” says Merrick.

The Farm-to-Fork Dinner Series is a highly successful, farm-to-table, upscale event featuring the very best that Ventura County has to offer. Three times each year, local chefs prepare locally-produced foods in a picturesque local, outdoor venue with the participation of local wineries, breweries and other local vendors. Some county historical fact is always highlighted, for example, a traditional blessing and dance presented by a local member of the Chumash Native American Tribe to open the Dinner At The Ocean event in 2012. A local a charity always receives a portion of the proceeds from each dinner. The end result is always magic and has become the Totally Local VC capstone as each of the dinners are sold out well in advance with people traversing the state to attend.

Merrick’s favorite part about each dinner is introducing local farmers, ranchers, chefs, winemakers and other small food vendors to very appreciative guests. “Ventura County offers the best of the best. Many people aren’t even aware of what is available here,” Merrick gushes.

And so much more 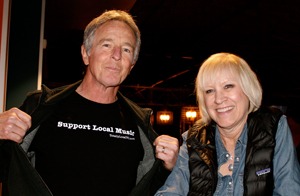 In addition to the Farm-to-Fork Dinner Series, Merrick’s Totally Local VC is deeply involved in educating local students and our community on the vital role that the agriculture industry plays in our lives. Totally Local VC hosts several ag-related events such as Ventura County Ag Week, Taste of Local, Cheers for Charity, and student culinary and farm tours, just to name a few.

What does living local mean?

On what her kids call her soapbox, Merrick will remind anyone who will listen: “We must take stock in ourselves. If everyone in the county shifted only 10% of what they purchase to goods and services produced in Ventura County, $138 million in annual revenue would be reclaimed for our local economy. If we shift only 10% of our food purchases to local producers, county farmers and ranchers will realize $168 million in revenue to benefit our residents and help shape our economic future.” 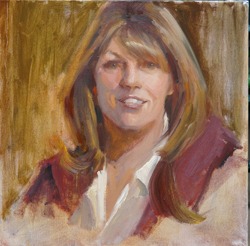 Kat was one of 55 locals honored in “The Face of Ventura” series sponsored by the Ventura Breeze. These portraits by renowned local artist Johanna Spinks now hang in the Museum of Ventura.

Impressive numbers, indeed! But what does “living local” actually mean? To Merrick, it means supporting local musicians, local artists, local merchants, local service providers, local agriculture and local non-profits. Of course, not everything we need can be found within our own county. So next she suggests supporting regional businesses by making purchases within the tri-county area and then within a 100-mile radius. After that she favors dollars spent in California and the United States. “It all contributes to rebuilding a stronger, more self-sufficient county, state and country,” she notes. On a personal level, she says, “People are beginning to get out of their houses and cars and recognize their neighbors – and give them their business. Totally Local VC is a part of that effort.”

On an individual level, living local is a way of life Merrick adopted long ago and ingrained in her children. “My kids say this isn’t a business for me, it’s just embodying my mantra – finally,” Merrick laughs. Merrick even includes her 8-year-old grandson, affectionately known as “The Dude” in her living-local pursuits. “He’s been riding on Totally Local VC floats in Ventura parades since he was very young. It’s a family affair.”

Do you think the clothing industry will continue to be based outside the US? Is there some way to make it happen for us here in Cali?

It was hard to say yes when Colleen asked to write a piece on me but after she explained that the message is important and why… well I said yes. Thank you Colleen McCall for all the support you have given me and Totally Local VC.

Beautifully, thoughtfully written. Thank you for profiling this great gal. I’m a frequent volunteer at her events and a HUGE supporter, both of her as an individual, and of the cause.

Great piece Kat! You always stand up for our little town, the down trodden and fairness!

Thanks for all you’re doing for our beautiful community. I’m behind you 100%.

Awesome. How have i never heard of this site.