Citrus and the rail set the stage for unprecedented stability. Part 3 of our history of Gold Coast Agriculture. 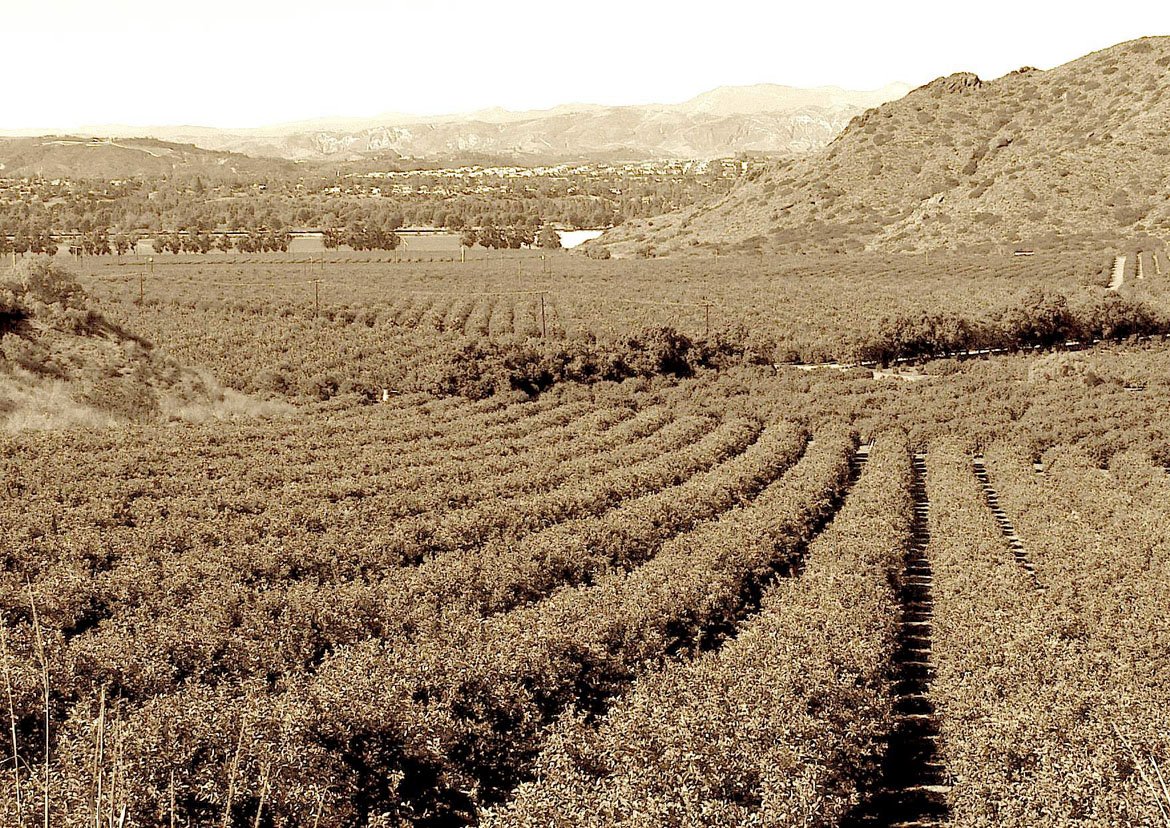 If it were possible to journey back in time to the late 19th Century, a visitor to Ventura County would recognize certain elements of our contemporary farm economy. Lemons, oranges, and even avocados could be found among the regions orchards. Port Hueneme’s wharf, completed in 1871, had expanded the reach of Gold Coast trade to all corners of the world, and with the arrival of the Southern Pacific Railroad in 1887 much of the County’s farm output traveled overland to markets in the East.

But in many other respects, Ventura County was a far different farmscape. Grain ruled Ventura County in late 1800s, peaking at more than 66,000 acres in 1890. Cattle – once the region’s primary commodity – were still prevalent, despite two terrible droughts in 1863-64, and 1876-77. But as it had done during its first century, Ventura County continued to evolve rapidly at the beginning of its second. Local farmers prospered from the adoption of two business strategies, sometimes independently, and sometimes together.

One strategy was to replace the middlemen, and create local companies that not only grew crops, but packed, processed, marketed and shipped them. A fine example is the American Beet Sugar Company, founded in 1898 by the Oxnard brothers in the city that now bears their name. Sugar is a commodity, but it proved to be a profitable one for Ventura County, once all elements of the industry were locally owned.

Another strategy was to leverage our growing season and benign climate to deliver fresh produce to distant markets that were still in the grips of winter. A fresh orange for New Year’s Day was a tasty treat for a snowbound Chicagoan or New Yorker that could command a premium price. Limoneira Company, founded in Santa Paula in 1893, embraced both strategies, creating what we would now call a “vertically integrated” business to grow and market fresh citrus fruit.

Rail transportation not only helped drive new growth, it did so in more ways than one. Trains delivered produce across the country, but they depended on oil. As it happened, oil was found to be readily available in Ventura County, and much of the money made in oil was reinvested in agriculture, creating even more produce in need of transportation. It is no coincidence that Wallace Hardison, one of the founders of Limoneira, was also a founder of the Union Oil Company, formed in Santa Paula in 1890. The original headquarters building is now home to the California Oil Museum, and includes painstakingly preserved offices and records from that era.

During this era, collaboration emerged as a defining characteristic of Ventura County farming. It became evident not only in the creation of businesses like the ones mentioned here, but in the formation of water districts and mutual water companies to share the cost of the expensive infrastructure needed for irrigated agriculture. The County was among the first in the state to create a local Farm Bureau and Extension Service office. The distance between farm and town has never been very large in Ventura County, and the leading citizens in town were well acquainted with prominent farmers (in those instances in when they weren’t one and the same).

As the 20th Century began to unfold, the “traditional” Ventura County crops gave way to a blend of Oranges, Lemons, Walnuts, Sugar Beets, and Lima Beans. By Ventura County standards, this progression took place very slowly and with a great deal of stability. The aforementioned hypothetical time traveler would note relatively little change between 1920 and 1950, beyond technological advances in farm machinery.

While it is tempting to think of this era as a Golden Age of Ventura County agriculture, remembered fondly by those among us with the longest memories, in truth that may be painting too rosy of a picture. After all, this period did include two World Wars and the Great Depression, as well as the occasional dry spells, winds or freezes that impact agriculture from time to time. Nevertheless, it was a time of remarkable stability and prosperity, and one of the only periods in which a son might profitably tend the same crops as his father, and expect to have his son tend them in turn.

But permanence is an elusive thing.

1957 saw the arrival of Sputnik, and the course of American history was altered. With far less fanfare, that year also saw a newcomer to Ventura County’s fields: the strawberry. As with Sputnik, the strawberry was the beginning of big change, wrapped in a small package.

This is the third chapter in Chris Sayer’s series on agriculture in Ventura County:
Where it’s been, what it has meant to the community, and a bit of informed speculation on where it is headed.

Previous chapters:
Chapter 1: The land before thyme
Chapter 2: If you build it, they will come

Next time: The #2 crop in Ventura County

If You Build It, They Will Come