Ventura City Hall is over 100 years old. Learn about its history and architecture. 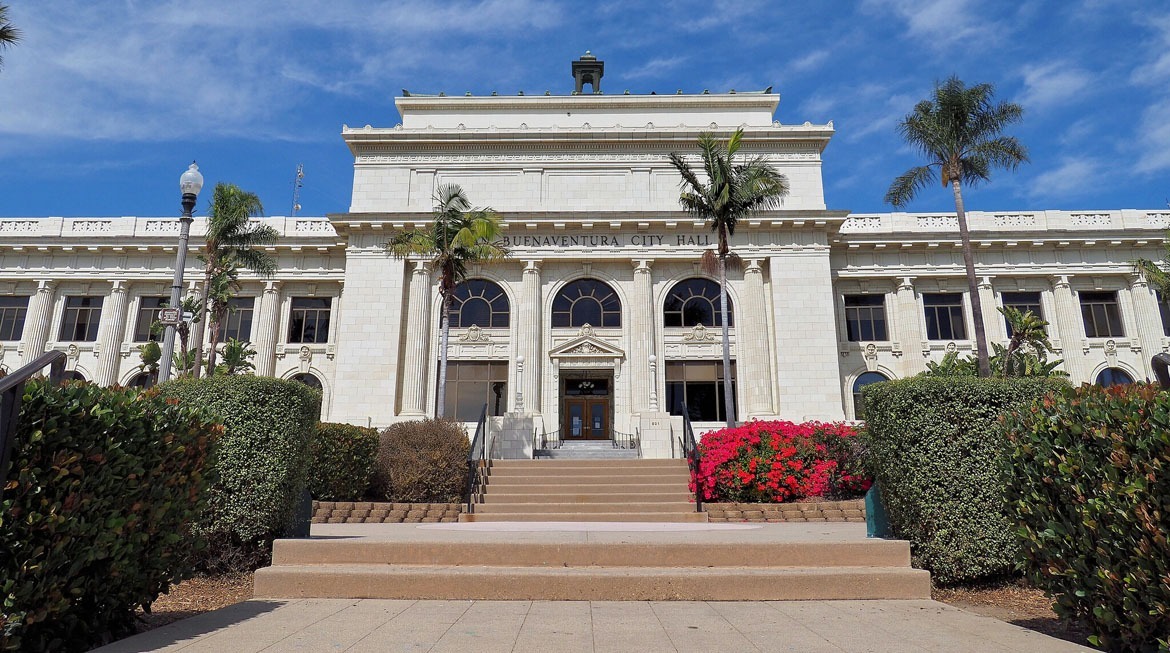 In 1911, the Los Angeles Times reported that the Ventura County Courthouse’s (now Ventura’s City Hall) “Roman Doric Order” design would be “one of the most imposing public structures in California, and a credit to the seat of government of the prosperous lima bean section.” Designed in 1910 by world-renowned architect Albert C. Martin and built in 1912 at a cost of $225,000, the courthouse was dedicated in July 1913. It is an outstanding example of neo-classical architecture manifested in the Beaux-Arts style, which was prevalent in public projects in the United States at the turn of the 20th century. The building is rich in details including a terra cotta facade with scrolls, floral designs, and whimsical faces of Franciscan padres, the order that founded the city of Ventura in 1782. Granite walkways take you through this amazing building. The original central courtroom, now the City Council chambers, features dark mahogany woodwork, a stained-glass skylight and beautiful arched windows each with views downtown to the ocean.

In 1968, the courthouse was condemned as an earthquake risk, and could have been torn down but the city bought the structure and worked to renovate it, turning it into Ventura’s City Hall. The Los Angeles Times again wrote about the landmark structure: “Probably no local structure is more visually and symbolically dramatic, or as steeped in local legend. Perched like a lordly, lavish manor at the juncture of California and Poli streets, it overlooks the old town and the blue Pacific beyond – a constant reminder of the past.

Mr Senate and a few others will be taking the guests on a very special tour of City Hall as part of the Totally Local VC Dinner At The City event. It will be a great night of conversation about our community, our history and we are sure a few ghost stories will be thrown in as well.