Chris Sayer of Petty Ranch is a fruit-loving foodie´s dream. Find out why. 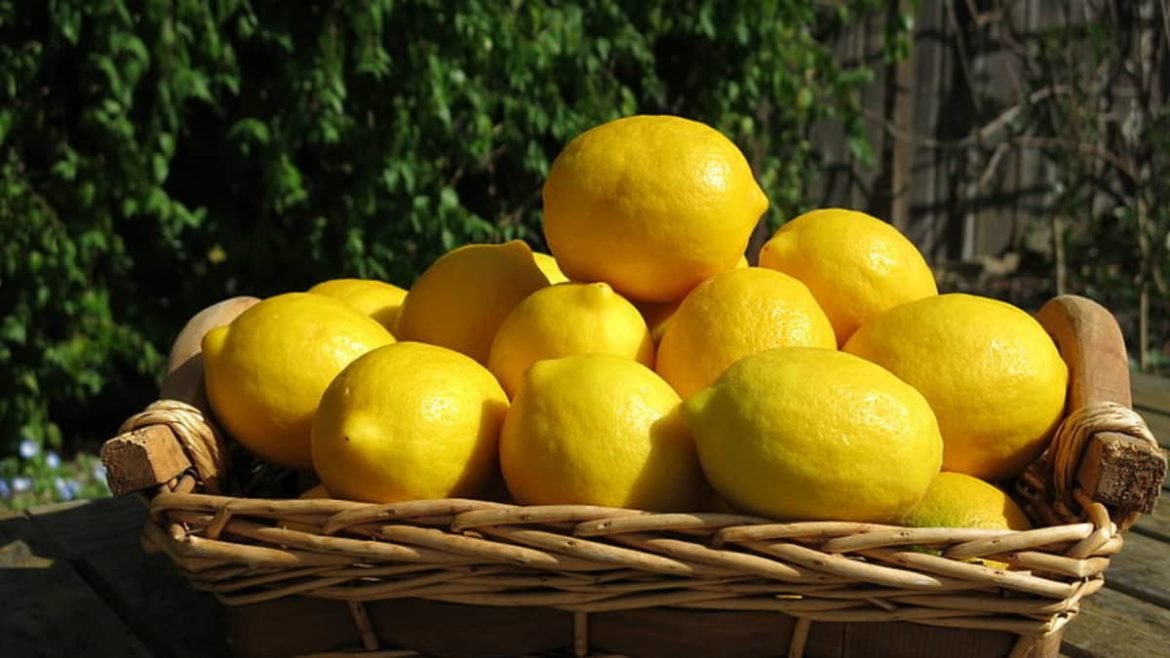 Chris Sayer of Petty Ranch is a fruit-loving foodie’s dream. He runs his family ranch in an artisanal fashion, growing limited amounts of specialty crops and waiting to harvest them at their peak. His tree-ripened, handpicked fruit yields concentrated flavors much more intense than regularly harvested commercial fruit. 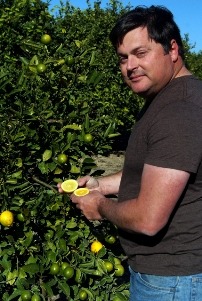 In Ventura County, approximately 300,000 tons of lemons are harvested each year for larger commercial growers. But there is a world of flavor that exists beyond mass-produced fruit – that of smaller farms with hands-on farmers who patiently grow fruit in a way that puts flavor first.

My taste buds first tripped upon Petty Ranch produce in a lemon crepe cake created by Kate Slaton Dunbar of Petite Reve Café. The cake consisted of 16-20 layers of perfectly speckled crepes and in-between them was the most divine, just-tart-enough, sunny-hued lemon curd. Dunbar confided the Meyer lemons she’d purchased from Petty Ranch were the secret behind her incredible curd.

Dunbar features as many Petty Ranch products on her menu as she can squeeze in. She uses their blood oranges, navel oranges and lemons for her syrups and citrus bars and their figs for tarts, cakes, whipped cream and pastry cream. Dunbar is part of the McGrath farming family and feels passionately about sourcing food locally and supporting smaller farms. Equally important to her is Sayer’s knowledge of what he grows. “The diversity of [Petty Ranch] citrus crops helps me keep their produce on my menu year-round and Chris’s understanding of the citrus they grow makes it effortless for me when ordering. I can tell him what flavor profiles I want and he can match it to their citrus.” 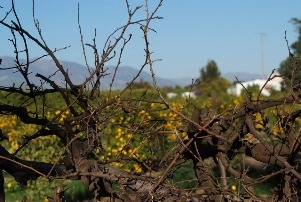 Tim Kilcoyne chef/owner of The Sidecar Restaurant in Ventura also highlights Petty Ranch produce on his menu. “I use it in just about everything.” Their blood oranges, figs, grapefruits and Meyer lemons are in his salads, desserts, salad dressings, soup and preserves. He makes pickled figs to accompany duck confit and infuses his own Meyer lemon vodka for lemon drop martinis. “One of the things that I really like about Chris and Petty Ranch is how hands-on they are. He is growing, picking, taking orders and delivering. I choose them also because of the small farm feel that all of those things he does brings.”

Ventura Limoncello Company buys Petty Ranch Eureka and Lisbon lemons for their handcrafted lemon liqueur and is in the process of developing Ventura OrangeCello Blood Orange Liqueur, using their blood oranges. “Chris personally picks the lemons to our specifications, ensuring we are getting the freshest “tree-ripened” fruit to produce our award-winning Limoncello,” explained James Carling, President of Ventura Limoncello Company.

So who is this farmer behind so many delicious dishes on Ventura menus? I recently had the opportunity to visit Petty Ranch and walk the rows of laden lemon trees with him.

Sayer has a quiet boyish charm that complements his creative smarts. He’s very humble and easy-going but doesn’t miss a thing. 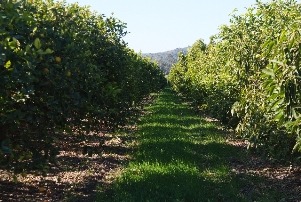 We first looked out over the acres of Eureka and Lisbon lemons trees dating back to the 1960s. “The soils and microclimates of Ventura County make it ideal for producing lemons, both in quantity and quality,” noted Sayer. There were purple-hued mountains in the background and ancient 35-ft high avocado trees on one side acting as a windbreak. In-between the rows of lemon trees were lush green plants that appeared to be weeds. “But,” Sayer explained, “they are cover crops of white clover and rye grass that help fix nitrogen in the soil, stop erosion and aid in breaking up hard, compacted soil around the trees.” 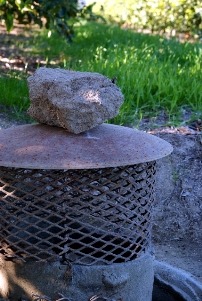 Though he can’t prove it scientifically, he believes also believes they also make his fruit taste better. As we walked further, Sayer gave an example of their demonstrated usefulness. “See that drain?” he asked. “When heavy rains would fall, someone used to have to come out several times in the middle of the night to clear it out. Since we planted the cover crops, it never gets clogged.” This means the cover crops are keeping the soil between the rows porous and also keeping it in place with their root systems.

Like farmers over the years who religiously studied the almanac, Sayer looks to nature for solutions. For flooding and erosion – cover crops. But what about when the cover crops on his Santa Paula property proved impossible to mow due to rocky, hilly soil? After breaking weed-eaters on rocks and finally resorting to torching them with a flame, (“fun but ultimately not a good solution”), Sayer got goats. “They’re great entertainment and lawnmowers.” 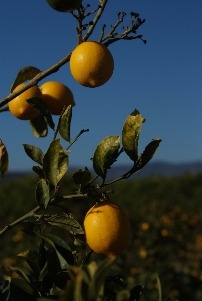 We moved on from the lemon trees planted in the 1960s to learn about the new acre of marvels I’d tasted all over town – the Meyer Lemons. These trees were much younger and smaller but fully laden, heavy producers with deep, golden orbs hanging all over them like ornaments. “This one-acre produces 12-14,000 pounds of fruit in one year and chefs just go crazy over them.” explained Sayer.

A hybrid between a lemon and mandarin orange originally from China, Meyer lemons are sweeter, more complex, more perfumed and less acidic. As Alice Waters, founder of Chez Panisse stated, “I don’t know many people who have tried [a Meyer lemon] without getting hooked.”

Sayer plucked a Meyer lemon from one tree and a Eureka from another, cut them open and we smelled them. They were distinctly different. The Meyer lemon was so much more pungent. They were also darker, thinner-skinned and juicier. Then Sayer showed me a half green Eureka on a tree and explained most lemons harvested for commercial industries are picked at this point. But most of his clientele prefer to wait for the fruit to fully mature. “For our chefs and artisan producers, a more complex and complete flavor is desirable. It allows the sugars and oils to develop further.” Indeed, sometimes Sayer’s fully ripened Meyer lemons have so much concentrated sugar in them their juice won’t fully freeze. 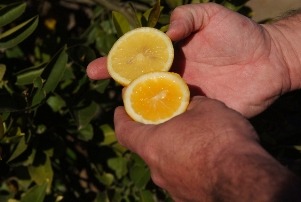 Because he is a smaller, specialty operation and sells locally, Sayer doesn’t have to further compromise his fruit’s flavor by washing and waxing them for transport. For example, the fruit he sells to Limoncello is left to mature 4 to 6 weeks longer than fruit sold to larger commercial operations and because it’s not waxed, further yields a more complete flavor and color. “Other limoncellos add colorant to their product but Ventura Limoncello doesn’t have to because the mature fruit yields a natural color as well.” 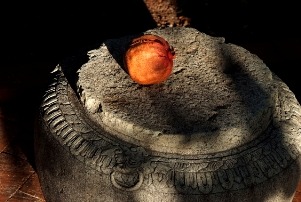 We then paid homage to the ancient fig tree, the secret garden and the vegetable garden his mother, artist Susan Petty has created. Throughout the afternoon I noticed beautiful, artistic touches — a dried pomegranate placed on a cement pedestal or gourds nestled on the office porch. When I met Susan Petty and saw her gardens and illuminating paintings, it all made sense. She beautifies the property and family home while Sayer both runs it and strives to take it to its next creative production level. Her husband Don Petty sauntered by on his way to tinker with something and I discover he’s the mechanical part of the puzzle. Just as Sayer strives for natural balance with his crops, so this family harmonizes and brings different strengths to the table. 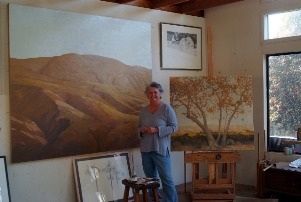 Sayers recently planted 100 new fig trees and hopes to propagate cuttings from the ancient fig tree. The plan for this year includes planting 400 more fig trees in several varieties like brown turkey, white Genoa, Osborne, Kadoka and Peter’s Honey. He’s also planning to experiment with quince fruit. Every choice he makes must be critically thought through as trees take years to fully mature and will produce for many years after if all goes well. 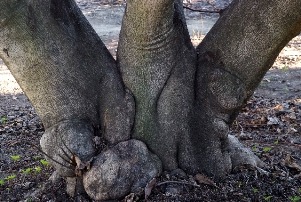 As the sun started to set, Susan Petty and I chased the winter sun, guessing where it might cast its final rosy hue on the ranch. It was a blessed afternoon at Petty Ranch getting to know Sayer and his family. To walk on a property that’s been farmed by a family since the 1880s is substantial but to be with a farmer who will wait and coddle fruit until it’s truly ready to be picked, was a privilege – almost like observing a lost art.

Taste Petty Ranch produce at The Sidecar Restaurant, The Local Café, Petite Reve Café and in limoncello by Ventura Limoncello Company. Don’t be afraid to ask the restaurants which items feature their fruit, that’s part of learning the local flavors of Ventura County.

Worth Their Weight In Gold